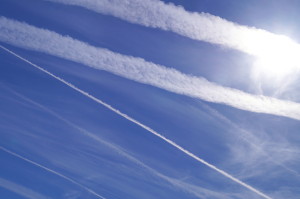 If climate engineering continues, “no flesh will be saved”.   Find out what it’s doing to us and how we can stop it.

Today we interrupt the Top 10 Countdown of New Age Lies to bring you an extremely critical prophecy update.

We’re in the midst of an accelerating convergence of many different trends and conditions that were prophesied in the Bible and which are all leading to a time of trouble such as never has been, no, nor ever shall be. This time of trouble will culminate with the Second Coming of our Lord Jesus Christ.   The Bible says that God shortened the days for His elect – if He hadn’t shortened the days no flesh would be saved. In today’s program we’re going to review the trends and conditions converging upon us in the US and across the world. We’ll see how they’re all related, how they fulfill Bible prophecy and how they all stem from a common source – a strategic plan behind this warfare against humanity and the planet. In particular we’ll be focusing in on geoengineering or climate engineering, the one risk factor we need to address in the immediate short term or there won’t be any life left on this planet within 10 years.

I’ve been deeply disturbed by what I’ve learned through the scientific research conducted and published by Dane Wigington and Sofia Smallstorm respectively. I wish to thank them and express my recognition of their courage and honor for upholding the truth and for exposing all the lies and deceptions of the enemies of mankind. Quite literally our planet is being surrounded by an evil web until all life becomes extinct. In the meantime people are distracted with their cellphones and entertained with the latest Hollywood productions or simply refuse to accept the truth.

Now I’m not a scientist, I’m simply a teacher of God’s truth. And I’m going to show you in the Bible where every strand in this evil web is coming from, and how we can work together to destroy it before it destroys us.

A Dying Planet, a Mutating Species

Anyone in their right mind today would agree that the world is unraveling very quickly. Let’s review some of the big changes going on:

I could go on and on about the dangers of geoengineering. This is the most threatening, deadly and urgent issue we need to deal with if the planet is to sustain life within ten years.

But wait, there’s more! I’m not done yet with the litany of evil conditions that are just about to overtake us. It gets darker. God’s Word is true. I think you’ll start to get the picture of this “time of trouble such as has never been before, no nor ever shall be” that the Bible predicts.

Is it just possible that all of these very disturbing yet seemingly unrelated phenomena are in fact the direct expression of an evil master plan, a coherent plan of war to destroy all life on planet earth? If yes, whose plan is that? What is their motive to destroy not only humanity but also all life forms? How do all of these pieces fit together? In French we would ask: “A qui profite le crime?” which in English means “Who benefits from the crime?” As always, we’ll go to the Bible for the answers to these questions.

From Genesis to Revelation

When you’re trying to solve any problem it’s crucial to identify the source of the problem, the root cause. Otherwise you can’t fix the problem. In warfare, you need to know your enemy so that you can defeat him. I’m going to demonstrate to you now, from the Word of God, it is Satan himself who’s trying to destroy us.   Satan began as an angel of light, a cherub of the highest order who covered God’s own throne with his wings. His name back then was Lucifer, which means light bearer. Lucifer began enamored with his own beauty and brilliance, and coveted God’s throne. He lied to the angels about God’s character. Lucifer managed to deceive one third of the angels. They also rebelled against God and were cast out of heaven with the devil. Since that time Lucifer became known as Satan, which means adversary – God’s adversary and ours by extension. Satan doesn’t sleep. His only purpose is to make war against God in open defiance of God’s law and government. I’m going to take you back in time to the Book of Genesis, to the week of Creation and the fall of man, to demonstrate that what appears to be the madness of unethical scientists or the lust for power of a world elite is actually a precise, methodical and systematic plan to exterminate, corrupt or counterfeit everything that God created and to usurp the role of God in the universe. The Book of Revelation will tell us how we can defeat Satan.

In the Book of Genesis chapters 1 and 2 we find the description of how God created the universe. We’re going to take one by one the elements that God created, and we’ll show how Satan has systematically come against every single thing God created to pervert it or destroy it.

I hope you’re starting to grasp the master plan operating behind the scenes. It’s not a coincidence that EVERY SINGLE THING God created has been perverted and corrupted and now is on the verge of full destruction. There’s no accident here. This convergence is a very deliberate and systematic attack against every word written in the Book of Genesis and against every intent of the Creator. What God pronounced good and very good when He made it is now corrupted, perverted, and abominable in His sight. This is supernatural evil, no human mind alone could’ve dreamt up this science fiction plot without help from fallen angels. God created the angels of an order superior to men, with powers and knowledge we don’t have.

So now we understand where this evil is coming from. But Jesus is coming soon and when He does the whole earth will be destroyed. After the millenium Jesus will create a new heaven and a new earth.  Therefore some of you might be wondering and I also asked myself this question: do we really need to do anything about this warfare against the planet and humanity that Satan is engaged in? Why not just let it play itself out and simply prepare for Jesus’ return? There are at least three reasons why we need to fight back:

1) God gave us the earth as our habitat, and instructed us to be good stewards of it. We don’t want the Lord Jesus to return and find us asleep, having allowed His enemy to plunder and destroy His Creation.

3) We need to finish the Work. Satan knows very well that Jesus will come when the gospel has been preached to every nation, kindred, tongue and people and at that time Satan’s judgment will begin. He’s trying to prevent that moment from ever happening by destroying the earth and all forms of life before the work can be finished. Remember, when Jesus comes back, He finishes stage 2 of His work that started in Calvary and will be totally concluded when He comes back in the clouds of glory. Satan wants to steal Jesus’ victory from Him.

4) But the most sobering reason of all is that Satan is out to kill us, all human beings. We’re fighting back in self-defense.

Defeating the Evil One

We need to be responsible and faithful stewards that guard and protect the earth that God gave us. So far Satan’s been having a field day, but it’s time to fight for this planet and reclaim it. It’s not just the planet we’re fighting for: it’s for our very existence and survival. No other material issue is of more concern right now than stopping geoengineering. In ten years the Northern Hemisphere may no longer sustain life.

The collapse of the dollar and the global economy, the establishment of the New World Order, as serious as those issues are, can’t compare to the absolute criticality of the imminent collapse of this planet. When there’s no oxygen left to breathe because the air is full of particulates, when there’s no water left to drink because it’s all toxic, and when there’s no soil left to harvest because all land has become desert or swamp, your gold and your silver won’t save you.

So what do we do? How do we move defeat our adversary?

Remember this: Satan is not invincible although he likes to think that he is. In fact, he’s a defeated foe. The Book of Revelation gives us the key to overcome Satan: “And they overcame him by the blood of the Lamb and by the word of their testimony, and they did not love their lives to the death.” (Revelation 12:11). Trust in God’s Word. We need to speak out. If we’re in Christ we’re covered by the blood of the Lamb. Jesus said that “he who seeks to keep his life shall lose it, and he who’s willing to lose his life shall keep it”. I believe that our generation, like the people of Nineveh when Jonah preached to them, will believe. “For what had not been told them they shall see, and what they had not heard they shall consider.” (Isaiah 52:15)