All These Are the Beginning of Sorrows 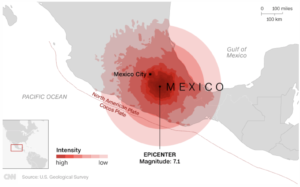 This month has been a difficult one for hundreds of thousands of people. Hurricanes Irma and Maria in quick succession ravaged the Caribbean Islands and caused thousands to be evacuated from their homes in Florida. Thousands others lost their homes and possessions to the damages of wind and flooding. Altogether close to 50 people have died due this hurricane season.

Even now Puerto Rico and many other Caribbean Islands are without power and drinking water. Gas is scarce. People are starting to lack basic necessities. Hospitals are filled to capacity. Panic and despair are spreading. Only now military and FEMA personnel are starting to arrive.  Power may not be restored for months, making the drinking water situation extremely precarious. Those already challenged economies will take years to recover from this blow.

Regarding Puerto Rico the experts say that Guajataca Lake dam in the Northwestern part of the Island might fail at any moment because of the extreme pressure. If the dam were to break it would be Puerto Rico’s absolute ruin.

And if all that wasn’t enough, Mexico City suffered a 7.1 severity earthquake this past Tuesday. It killed more than 155 people in Mexico City and toppled dozens of buildings. In addition, hundreds of structures suffered significant damage and now pose a risk to rescue workers and residents.

Two more earthquakes shook southern Mexico yesterday, further rattling a country still coming to grips with the consequences of the previous one.

Do you see the pattern? US Solar eclipse. Hurricane Harvey. Hurricane Irma.  Mexico City earthquake. Hurricane Maria. The signs are increasing and accelerating. The Bible prophesies: “And there will be famines, pestilences, and earthquakes in various places. All these are the beginning of sorrows” (Matthew 24:7-8). What’s next? Where is it all leading?

If you haven’t yet, do listen to our podcast “Chronology of End Time Events” to understand how it will all unfold until the end.