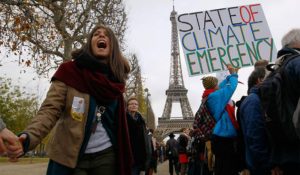 This is where current events meet prophecy. We know from Jesus’ Olivet discourse in Matthew 24 (and the parallel passages in the other gospels) that the end time generation would experience great natural calamities and would therefore be afraid. “Men’s hearts failing them for fear, and for looking after those things which are coming on the earth: for the powers of heaven shall be shaken” (Luke 21:26).

You might want to listen to a couple of podcasts I did a while back on the topic of climate engineering, also called geo-engineering.

The devil understands enough of the science of nature to be very dangerous. Working through scientists and engineers, Satan is tampering with the earth’s atmosphere, the earth’s substratum, wind currents, and marine ecosystems to produce more frequent and increasingly violent natural disasters.

Satan is moving the kings of the earth, the leaders of the nations, to be concerned about this issue. The papacy has very cleverly taken ownership of the climate issue and are positioning themselves as the ones with a solution. This is typical of how the Jesuits operate: create the problem and then offer the solution. The Paris Climate Agreement brought together the nations of the world to agree measures to combat climate change.

In September of 2016, then US President Obama signed up the United States for the Paris Agreement on Climate Change. Less than a year later, in June of 2017, President Donald Trump announced he was pulling the US out of the Paris Agreement. However, because the United Nations is a thick spider web, his decision to withdraw the US doesn’t become effective until November of 2020 at the earliest.

Immediately a number of city mayors in the US as well as business leaders made declarations against Trump’s decision. They committed publicly to put in place an action plan to comply with the requirements of the Paris Agreement. Members of the House of Representatives stepped forward and proposed a bill of law called H.R. 9, the “Climate Action Now Act”.

The bill was approved in the House of Representatives on May 2 2019. This bill would prohibit the US President from using federal funds to withdraw from the Paris Climate Agreement. This is a way of putting pressure on Trump to desist from his decision to withdraw the US. The other important requirement in this bill reads as follows:

“Not later than 120 days after the date of the enactment of this Act, the President shall develop and submit to the appropriate congressional committees and make available to the public a plan for the United States to meet its nationally determined contribution under the Paris Agreement …”.

On June 5th., the H.R. 9 bill of law was introduced to the Senate as S. 1743: International Climate Accountability Act and is waiting to be examined there. If the Senate approves it, the bill would then go on to the White House for signature by the President. Here are the links to these two bills of law.

Brothers and sisters, we can confidently expect that if this bill goes through and becomes law, one of the measures that the President will be driven to take, in order to meet the Paris Agreement requirements, is the implementation of a National Sunday Law. Climate change is the Vatican’s trojan horse to bring the whole world under its ecclesiastical authority. The pope has made his strategy very clear in his 2015 encyclical  on the environment called “Laudato Si”.

We have very little time left…