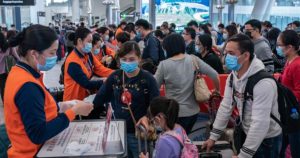 The deadly Corona virus is fast spreading across China and to the rest of the world. Here’s what Adventist Christians should know and do about it.

A deadly virus epidemic broke out in the city of Wuhan, China. As of now, 213 people have died in China and at least 9800 cases have been confirmed, according to the New York Times. The World Health Organization has just declared this a global health crisis.
The residents of Wuhan, and of 11 other Chinese mega-cities, are now quarantined. Over 50 Million people are now blocked inside their cities. City dwellers across China are beginning to experience shortages of water, food, medical supplies and other basic necessities.

Foreign countries are trying to repatriate their citizens living in Wuhan, but with the city being locked down it’s not an easy task. Many countries have suspended commercial flights to China.

According to most serious health reports, it’s likeliest that bats and possibly snakes are to blame as the animal carriers of 2019-nCoV. Bats are the main carriers of the disease but snakes in the wild eat bats and may have become infected. The Wuhan wet market or seafood market sold snakes and other wildlife. After humans became infected through contact with or eating these wild animals, the disease has spread through human-to-human transmission. (Source: health.com).

The following countries have already reported cases of the Corona virus:

What You Should Know About This Health Crisis

What Should We Do?