Fresh Insight into the Beast of Revelation 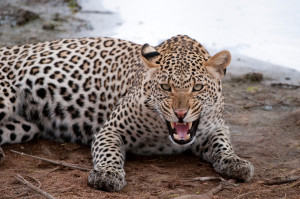 Kudos to Christopher Hudson of Forerunner Chronicles for his recent video production “Leopard Vision” (click on the link to watch the video on YouTube). Christopher has done an impressive job of packaging and presenting Bible truth about the Beast of Revelation 13.

I especially appreciated the fresh insight he had into verse 2:  “Now the beast which I saw was like a leopard, his feet were like the feet of a bear, and his mouth like the mouth of a lion.”  Indeed, although the beast has the feet of a bear and the mouth of a lion, in itself it’s like a leopard.  How often we’ve read that verse and not caught that important detail!  We get distracted by the fact that it has the feet of a bear and the mouth of a lion which of course symbolizes certain traits associated with those two species, but intrinsically this is a leopard.  Christopher then demonstrates historically and into the present how the Roman Papacy is like the leopard in that it watches its victims and waits for the right timing before attacking them.  We see this instinctual behavior being played out right now in the relationship between the Vatican and the U.S.  America has reached such a low point in morality and unethical, unconstitutional government that the American public is desperately looking for hope and a way out.  The Pope appears in their sight to be the answer.

I’d like to add another layer of similarity between the leopard and the Vatican:  speed!  Once the leopard has a victim in sight, it moves in upon it at great speed.  In the days of Alexander the Great, the Kingdom of Greece (the leopard beast in Daniel 7) conquered all of the known world in barely a few years.  So also, before our very eyes, Pope Francis has moved with lightning speed to conquer the world.  In the two years since he took office it seems that Pope Francis hasn’t slept very much, “working” his various constituencies across the globe.  We shall soon see what happens in the wake of his tumultuous US visit which The Guardian describes as:  “a whirlwind of pomp and connection with ordinary people which at times felt like a political campaign, rock star tour and spiritual seminar.”

In another article The Guardian says:  ” The question in the wake of the pope’s departure is how the so-called ‘Francis effect’ will play out … He was greeted with adulation and reverence by Barack Obama, a joint session of Congress, the United Nations general assembly and, finally, the city of brotherly love.”  In the words of Fidel Huerta, 46, a Mexican-born resident of Houston who had travelled with 97 other Latinos from Texas to see the pope: “He came at an important time. We need him.”  Indeed – with leopards it’s all about timing…