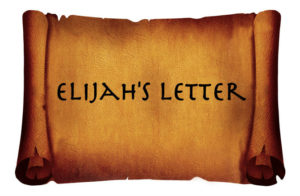 Question from one of our listeners:

Regarding the warning letter that was written by the prophet Elijah to King Jehoram: Could it be that the letter was not written by the prophet Elijah to Jehoram at the time of its delivery, but composed years before reaching Jehoram? Do we have an exact year when it was written? Or was there an error on the part of the transcriber, where the name Elijah was used, instead of Elisha, in the scripture: 2 Chronicles 21:12, as Jamieson-Fausset-Brown Bible Commentary states: 12-15. “there came a writing to him from Elijah the prophet—That prophet’s translation having taken place in the reign of Jehoshaphat [2Ki 2:11, 12], we must conclude that the name of Elijah has, by the error of a transcriber, been put for that of Elisha.” Matthew Poole’s commentary states: “There came a writing to him from Elijah.” Question. “How could this be, when Elijah was rapt up to heaven in Jehoshaphat’s time, 2 Kings 2:3,11.” Answer. Either, 1. “This was Elisha, or some other prophet called Elijah, because he acted in the spirit and power of Elijah, for which cause John the Baptist also is so called. Or rather, 2. This was really written by Elijah, who by the Spirit did clearly foresee and foretell the reign and acts of Jehoram, (as others did of Josiah, 1 Kings 13:2, and Isaiah of Cyrus, Isaiah 45:3, long before they were born,) and in consideration thereof left this prophecy with Elisha, to be delivered in due time by him, or some other person in his name, and as from his mouth.”

I look forward to your reply, Kind regards, Emily

This is a fascinating Bible story of how the Lord punished Jehoram’s iniquity, in His displeasure with Jehoram’s worship of Baal.

Jehoram King of Judah was the firstborn son of Jehoshaphat (2 Chronicles 21:1), who inherited his father’s throne. According to 2 Kings 8:16 Jehoram became king of Judah (the Southern Kingdom) in co-regency with his father Jehoshaphat king of Judah in the fifth year of Jehoram King of Israel (the Northern Kingdom). 2 Chronicles 21:4 confirms this: “when Jehoram was risen up to the kingdom of his father he strengthened himself and slew all his brethren (6 brothers) with the sword, and divers also of the princes of Israel”.

Historically the kingdom of Judah was slightly more faithful than the kingdom of Israel. But Jehoram King of Judah followed in the sinful ways of the kings of Israel. In order to form an alliance with Israel, the stronger of the two kingdoms, he married the daughter of King Ahab of Israel and Jezebel. According to 2 Chronicles 21:6: “And he walked in the way of the kings of Israel, just as the house of Ahab had done, for he had the daughter of Ahab as a wife; and he did evil in the sight of the Lord”. Despite his alliance with Israel his dominion was shaky, suffering the rebellion of the Edomites (descendants of Esau) and Libnah. And all these things happened to King Jehoram of Judah “because he had forsaken the Lord God of his fathers” (2 Chronicles 21: 10).  The Bible explains his sins in the next verse: “Moreover he made high places in the mountains of Judah, and caused the inhabitants of Jerusalem to commit harlotry (spiritual fornication), and led Judah astray”. 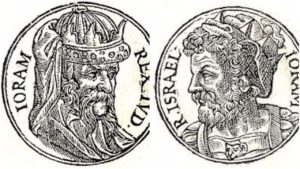 At this point King Jehoram of Judah receives a warning letter from Elijah the prophet. According to Ellen G. White in the book “Prophets and Kings” page 213:  “The king of Judah was not permitted to continue his terrible apostasy unreproved. The prophet Elijah had not yet been translated, and he could not remain silent while the kingdom of Judah was pursuing the same course that had brought the northern kingdom to the verge of ruin. The prophet sent to Jehoram of Judah a written communication, in which the wicked king read the awful words:”.

Let’s return to the Bible to read the message from the Lord and the rest of the account (2 Chronicles 21:12-20):

“Because … thou has walked in the way of the kings of Israel, and have made Judah and the inhabitants of Jerusalem to play the harlot like the harlotry (spiritual adultery) of the house of Ahab, and also have killed your brothers, those of your father’s household, who were better than yourself, behold, the Lord will strike your people with a serious affliction—your children, your wives, and all your possessions; and you will become very sick with a disease of your intestines, until your intestines come out by reason of the sickness, day by day.

Moreover the Lord stirred up against Jehoram the spirit of the Philistines and the Arabians who were near the Ethiopians. And they came up into Judah and invaded it, and carried away all the possessions that were found in the king’s house, and also his sons and his wives, so that there was not a son left to him except Jehoahaz the youngest of his sons.

After all this the Lord struck him in his intestines with an incurable disease. Then it happened in the course of time, after the end of two years, that his intestines came out because of his sickness; so he died in severe pain. And his people made no burning for him, like the burning for his fathers.

He was thirty-two years old when he became king. He reigned in Jerusalem eight years and, to no one’s sorrow, departed. However they buried him in the City of David, but not in the tombs of the kings.”

Jehoram King of Israel, the son of Ahab, reigned twelve years. He was slightly less wicked than Jehoram of Judah

He was still reigning when his nephew Ahaziah, the son of King Jehoram of Judah, came to the throne of Judah. Ahaziah ruled only one year.