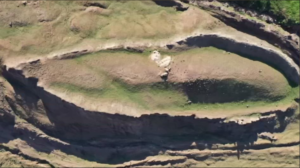 God’s Word is truth. Archaeologists have found evidence of the existence of Noah’s Ark and are digging it up. So the flood isn’t just a mythological story as some presume to think.

How much more evidence do we need that our time has almost run out? Below is a reprint of the story by Fox News:

NASHVILLE, Tenn. (WZTV) — A biblical story is getting new life thanks to new evidence of the possible existence of Noah’s Ark.

Researchers say they have 3-D images of what they believe is The Ark in the Ararat Mountains in Turkey.

The man who was instrumental in these discoveries is a Tennessean named Ron Wyatt and, because of his discoveries, this site was eventually declared a national park.

Ron has passed away, but a biblical researcher named Andrew Jones has taken over his work and led an expedition which produced these images of huge boat-shaped object buried in the Ararat Mountains.

“It’s a man-made object and it’s a ship form,” says Andrew Jones. “We’re not going to find a sign that says, ‘made by Noah and sons,’ but what other ship would it be on the side of a hill at 6,500-foot elevation in the mountains of Ararat?”

He says the ship is 515 feet long, which matches the biblical account of being 300 cubits.

“If you shoot an electrical current below the ground and it hits a pocket of air, that has a different type of conductivity versus something like water or rock. So, the software can interpret the signals coming back and create a 3-D image.”

And that’s what they’ve created: a 3-D image of what he believes is humanity’s lifeboat.

“A perfectly preserved hull below the ground. Petrified, solid, hull of a ship and three different layers, just like The Bible says. There were 3 different decks on The Ark.”

Now, the team is working to figure out how to finally excavate the boat.

Jones says they are working with the Turkish government and archaeologists will submit plans on how they want to proceed.

However, if plans get approved it would still take a few years to excavate.

They also expect to find things that would go along with the biblical story, possibly animal remains, and Jones says that’s part of the reason for wanting to do an excavation.

Link to the story on the Fox News website, with news video: https://fox17.com/news/local/tennessees-connection-to-possible-noahs-ark-discovery?jwsource=em