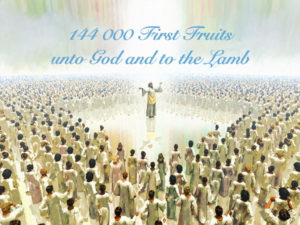 One of our listeners had some very interesting questions about the 144 000. Below are the answers I provided.

“We just listened to your latest presentation on Youtube. We really appreciate all the insight that you have. I have a question that has been on my mind for a few weeks. If God’s people are sealed before they give the loud cry, then why do they go through such a difficult test after the Sunday law? If they are sealed, they cannot be unsealed. So why such a huge test? I see that Sister White does say that they have to go through the terrible trial because they have to in order to reflect Christ’s character perfectly, but I still have a question. Also you did not mention a separate close of probation for God’s people. If so where in that timeline would that happen? Thank you very much for your work.”

Thank you Connie for reaching out with some great questions! I believe you answered your own question by saying that they must be refined until they come forth as gold and all dross is removed. Having said that, let me give you some biblical evidence for why they need to enter the tribulation already sealed.

If you scan quickly through Revelation 7, you’ll see that God’s army (the 144 000 special forces) are in battle array with their foreheads sealed. Then we’re introduced to the Great Multitude, who obtained the victory over the beast as a result of the labor of the 144 000.

Immediately afterwards – still in Rev. 14 – we read about the PATIENCE of the saints. The same core idea of patience is presented in James 5, verses 7 through 11. The Lord waits patiently for His special forces to be ready, then sends Holy Spirit rain upon them. (By the way, it’s the Holy Spirit that seals). In James:10-11 we again are told to emulate the patience of the prophets, and the perseverance of Job. The end intended by the Lord is good: the sealed ones will mirror the perfection of Christ.

This is what Ellen White has to say about this in “The Great Controversy”, in the chapter called “The Time of Trouble”:

“Could men see with heavenly vision, they would behold companies of angels that excel in strength stationed about those who have kept the word of Christ’s patience. With sympathizing tenderness, angels have witnessed their distress and have heard their prayers. They are waiting the word of their Commander to snatch them from their peril. But they must wait yet a little longer. The people of God must drink of the cup and be baptized with the baptism. The very delay, so painful to them, is the best answer to their petitions. As they endeavor to wait trustingly for the Lord to work they are led to exercise faith, hope, and patience, which have been too little exercised during their religious experience.”

There is another very important reason as to why God’s people must go through the tribulation even though they’re already sealed: Never forget that in this great controversy, God stands accused before the entire universe. He is both Judge, and Judged. Why? Because Satan has slandered Him and assassinated His character. Satan gave false witness about God to the angels in heaven, and caused them to fall. He did the same on earth and caused man to fall. Therefore, the vindication of the character of God is one of the most important aspects of ending the great controversy and re-establishing God’s kingdom on earth.

This is the role of the 144 000 who will be standing when Jesus comes. They must endure all in order to demonstrate to the watching universe that they love God for who He is and not only for His blessings. As stated in Romans 3:4: “That You may be justified in Your words, and may overcome when You are judged“.

Like Job, we need to demonstrate that we’ll confess His name despite enduring great affliction during the time of trouble. If there were NO remnant to stand true to God, Satan could lay claim to the kingship of the earth on the pretext that every knee has bowed to him. Satan could say that all of earth’s subjects are his and that the Plan of Redemption is forfeited because God has no subjects on earth.

Brothers and sisters, it is imperative that we all become a part of God’s remnant army that will fully manifest God’s character at the end. As Jesus said: “If you have seen me, you have seen the Father”. “God will send His angels to comfort and protect them in the time of peril. The assaults of Satan are fierce and determined, his delusions are terrible; but the Lord’s eye is upon His people, and His ear listens to their cries. Their affliction is great, the flames of the furnace seem about to consume them; but the Refiner will bring them forth as gold tried in the fire. God’s love for His children during the period of their severest trial is as strong and tender as in the days of their sunniest prosperity; but it is needful for them to be placed in the furnace of fire; their earthliness must be consumed, that the image of Christ may be perfectly reflected.”

Don’t fret too much if you’re not there not. I certainly am not. I still make way too many mistakes. But Jesus isn’t looking to the 144 000, disappointed at their failings. No! He looks to the Father, knowing that the Father will keep His word and sanctify us. Let us also look to Him, the author and finisher of our faith.

“I do have another question regarding the 144,000 though. Because there are multitudes that come in with the Loud Cry that the 144,000 gives, I am trying to understand what happens to them after the close of probation. My question is: the 144,000 are the ones who will be translated when Jesus returns. So what happens to all the saved souls from the end time harvest? I know many will be martyred, but surely the 144,000 can’t be the only ones that survive? Or, do the others become a part of the 144,000? I have thought of the parable of the wages…last ones get same as ones who worked all day and don’t know if that applies or not. I can’t seem to find any answers. Can you help me with this? Thank you for any direction you can give.”

Thank you Connie for another interesting question. Indeed I don’t think there’s a clear answer to this question.

We know from the Fifth Seal of Revelation: The Cry of the Martyrs, that many will die in the end time persecution, just as many died during the medieval persecution and the inquisition:

“9 When He opened the fifth seal, I saw under the altar the souls of those who had been slain for the word of God and for the testimony which they held. 10 And they cried with a loud voice, saying, “How long, O Lord, holy and true, until You judge and avenge our blood on those who dwell on the earth?” 11 Then a white robe was given to each of them; and it was said to them that they should rest a little while longer, until the number of their fellow servants and their brethren, who would be killed as they were, was completed.” (Revelation 6:11)

I believe the Bible is deliberately vague on this point. In fact, in Revelation 7 there’s a bit of a blurring of the differences between the two groups, the 144 000 and the Great Multitude. We could also call it a blending of the two. Both classes come out of the great tribulation, will serve the Lord in His temple, were subjected to hunger and thirst during the time of trouble and will be comforted by the Lamb when it’s all over (Revelation 7:14-17).

I’ll give you my personal opinion because I don’t have any definitive Bible or Ellen White text on this. I lean toward believing that an undetermined number of the Great Multitude who are still alive at the close of probation (when Michael stands up – Daniel 12:1) will, like the 144 000, be translated without tasting death. Another probably larger number of them will be martyred.

On what grounds would that distinction and sifting be made? Again, pure speculation on my part, but I suspect character may be the defining factor. Only those with the patience of the saints and the faith of Jesus would be able to endure until the end.

Here are some additional useful quotes from The Great Controversy:

“As the decree issued by the various rulers of Christendom against commandment keepers shall withdraw the protection of government and abandon them to those who desire their destruction, the people of God will flee from the cities and villages and associate together in companies, dwelling in the most desolate and solitary places. Many will find refuge in the strongholds of the mountains. Like the Christians of the Piedmont valleys, they will make the high places of the earth their sanctuaries and will thank God for “the munitions of rocks” (Isaiah 33:16). But many of all nations and of all classes, high and low, rich and poor, black and white, will be cast into the most unjust and cruel bondage. The beloved of God pass weary days, bound in chains, shut in by prison bars, sentenced to be slain, some apparently left to die of starvation in dark and loathsome dungeons. No human ear is open to hear their moans; no human hand is ready to lend them help.” (Great Controversy page 626)

“The heavenly sentinels (NOTE: the holy angels), faithful to their trust, continue their watch. Though a general decree has fixed the time when commandment keepers may be put to death, their enemies will in some cases anticipate the decree, and before the time specified, will endeavor to take their lives. But none can pass the mighty guardians stationed about every faithful soul. Some are assailed in their flight from the cities and villages; but the swords raised against them break and fall powerless as a straw. Others are defended by angels in the form of men of war.” (Great Controversy page 631)

“If the blood of Christ’s faithful witnesses were shed at this time, it would not, like the blood of the martyrs, be as seed sown to yield a harvest for God. Their fidelity would not be a testimony to convince others of the truth; for the obdurate heart has beaten back the waves of mercy until they return no more. If the righteous were now left to fall a prey to their enemies, it would be a triumph for the prince of darkness.” (Great Controversy page 634)

Thank you Connie for those great questions. Keep them coming!

I’d love to hear from other listeners as well. You can submit your question on the website or email me at info@citybiblegroup.com.