The Power of Agreement 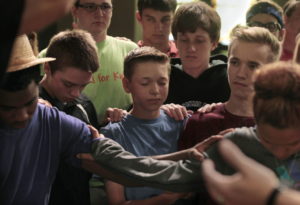 One of the truths that has most shaped my ministry as a Prayer Warrior is the power of agreement. It all started three years ago when I was helping our church to develop and grow our Prayer Ministry. I was working to get the Prayer Team to do an intercessory prayer service in the sanctuary every Sabbath after the divine service. One Sabbath afternoon we were in the Prayer Room rehearsing what the prayer line should look like, and this still small voice inside of me kept reminding me of the words of Jesus in Matthew 18:19: “If two of you agree on earth concerning anything that they ask, it will be done for them by My Father in heaven”. Being quite new in the church and on the team, I was shy to bring it up as it was already a victory that the team was willing to stand in front of the congregation. It had not been easy to persuade them to change their ways and give up the seclusion of the Prayer Room…

Evidence that the still small voice was the Holy Spirit, one of the Prayer Warriors who’d been on the team the longest piped up: “We should pray in two’s”. I was overjoyed! I didn’t have to fight this battle on my own. So this is how our Prayer Team started leveraging the power of agreement in prayer. That became the foundation of our intercessory Prayer Ministry. From that day onwards we always prayed with at least two Prayer Partners (three if available) coming into agreement on behalf of the petitioner. As a result of our obedience and of standing on the promise in Matthew 18:19, we saw many miracles in our church: healings, financial turn-arounds, families reunited, conversions and baptisms, etc. We also began a successful Drive-thru Prayer Outreach that takes place once a month and ministers to the community around the church. Many have come back to testify of the power of prayer in agreement.

But there’s a deeper layer of meaning and power framing that scripture of two coming into agreement on behalf of the petitioner(s) so that may receive what they’re asking for. In Matthew 18 the Lord gave us two additional scriptures concerning the power of agreement:

So in that chapter alone, God is establishing the power of agreement by the three scriptures, as follows:

The foundation of this great truth if laid in Deuteronomy 19:15, where it’s stated as part of the Hebrew Law: “One witness shall not rise up against a man for any iniquity, or for any sin, in any sin that he sinneth: at the mouth of two witnesses, or at the mouth of three witnesses, shall the matter be established”. God Himself follows this pattern in His Word. Any Bible truth of great importance will be repeated at least once or twice (and of course, sometimes multiple times) in different places so that it may be firmly established both in the spiritual and in the physical realms. Because the Lord really wants us to get this, it’s also stated in John 8:17, 2 Corinthians 13:1 and 1 Timothy 5:19. In other words, there are multiple witnesses to this operating principle of God’s universe.

There’s an extremely powerful Bible story that illustrates the power of this principle in Genesis 11:1-9, the story of the Tower of Babel:

“And the whole earth was of one language, and of one speech. And it came to pass, as they journeyed from the east, that they found a plain in the land of Shinar; and they dwelt there. And they said one to another, Go to, let us make brick, and burn them thoroughly. And they had brick for stone, and slime had they for morter. And they said, Go to, let us build us a city and a tower, whose top may reach unto heaven; and let us make us a name, lest we be scattered abroad upon the face of the whole earth. And the Lord came down to see the city and the tower, which the children of men builded. And the Lord said, Behold, the people is one, and they have all one language; and this they begin to do: and now nothing will be restrained from them, which they have imagined to do. Go to, let us go down, and there confound their language, that they may not understand one another’s speech. So the Lord scattered them abroad from thence upon the face of all the earth: and they left off to build the city. Therefore is the name of it called Babel; because the Lord did there confound the language of all the earth: and from thence did the Lord scatter them abroad upon the face of all the earth”.

This story is a counter-example because their behavior proceeded from rebellion against God and disbelief of His Word: God had promised He’s never destroy the world again by water, and yet these post-diluvians were trying to protect themselves from another flood by climbing to great heights. Nevertheless, the truth remains and has been established in the heavens and on the earth that when men come into agreement and in the same language declare a truth, it cannot be denied them.

The Godhead itself operates on the same principle and role models it for us: “For there are three that bear record in heaven, the Father, the Word, and the Holy Ghost: and these three are one”, (1 John 5:7). When Jesus was baptized, the Father spoke from heaven to bear witness of Jesus. During the transfiguration Moses and Elijah came into agreement to witness to Jesus and encourage Him shortly before His night of trial in the Garden of Gesthsemane. At Pentecost the Holy Spirit poured down from heaven bore witness that Jesus’ sacrifice had been accepted and that He had begun His ministration as High Priest in the Holy Place in the heavenly sanctuary. There are other deep biblical truths that we’ll explore another time, such as three witnesses on earth confirming what the witnesses in heaven say (1 John 5), such as the Old Testament and the New Testament being the two witnesses in Revelation 11, etc.

Ultimately, coming into agreement is all about becoming one in love: “Neither pray I for these alone, but for them also which shall believe on me through their word; That they all may be one; as thou, Father, art in me, and I in thee, that they also may be one in us: that the world may believe that thou hast sent me. And the glory which thou gavest me I have given them; that they may be one, even as we are one: I in them, and thou in me, that they may be made perfect in one; and that the world may know that thou hast sent me, and hast loved them, as thou hast loved me” (John 17:20-23).

When we understand these deep Bible truths, we never pray the same way again! So be encouraged to apply this prayer principle in your prayer ministry and even in your own spiritual battles.