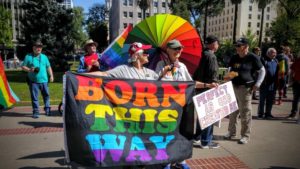 The Seventh-day Adventist Church released a statementon April 11, 2017 regarding the position of the church regarding transgenderism and the attitude that SDA Church members should have toward transgender individuals. I found the statement to be very carefully thought through and compassionate while being grounded in bible truth. I’m including the entire text below for your benefit. If you’d like to visit the Seventh-day Adventist Church website page where this was posted, click here.

In his role as chair, Ted Wilson, president of the Seventh-day Adventist Church urged the statement be voted “with the understanding we may be able to adjust a little phrasing here or there that might make it less abstract.” He went on to say, “The last thing we want to do is chase people away from Christ and the Church. We want them to come to the foot of the cross and His changing grace.”

The increasing awareness of the needs and challenges that transgender men and women experience and the rise of transgender issues to social prominence worldwide raise important questions not only for those affected by the transgender phenomenon but also for the Seventh-day Adventist Church. While the struggles and challenges of those identifying as transgender people have some elements in common with the struggles of all human beings, we recognize the uniqueness of their situation and the limitation of our knowledge in specific instances. Yet, we believe that Scripture provides principles for guidance and counsel to transgender people and the Church, transcending human conventions and culture.

In modern society, gender identity typically denotes “the public (and usually legally recognized) lived role as boy or girl, man or woman,” while sex refers “to the biological indicators of male and female.”[1] Gender identification usually aligns with a person’s biological sex at birth. However, misalignment may happen at the physical and/or mental-emotional levels.

On the physical level ambiguity in genitalia may result from anatomical and physiological abnormalities so that it cannot be clearly established whether a child is male or female. This ambiguity of anatomical sexual differentiation is often called hermaphroditism or intersexualism.[2]

On the mental-emotional level misalignment occurs with transgender people whose sexual anatomy is clearly male or female but who identify with the opposite gender of their biological sex. They may describe themselves as being trapped in a wrong body. Transgenderism, formerly clinically diagnosed as “gender identity disorder” and now termed “gender dysphoria,” may be understood as a general term to describe the variety of ways individuals interpret and express their gender identity differently from those who determine gender on the basis of biological sex.[3] “Gender dysphoria is manifested in a variety of ways, including strong desires to be treated as the other gender or to be rid of one’s sex characteristics, or a strong conviction that one has feelings and reactions typical of the other gender.”[4]

Due to contemporary trends to reject the biblical gender binary (male and female) and replace it with a growing spectrum of gender types, certain choices triggered by the transgender condition have come to be regarded as normal and accepted in contemporary culture. However, the desire to change or live as a person of another gender may result in biblically inappropriate lifestyle choices. Gender dysphoria may, for instance, result in cross-dressing,[5] sex reassignment surgery, and the desire to have a marital relationship with a person of the same biological sex. On the other hand, transgender people may suffer silently, living a celibate life or being married to a spouse of the opposite sex.

Biblical Principles Relating to Sexuality and the Transgender Phenomenon

As the transgender phenomenon must be evaluated by Scripture, the following biblical principles and teachings may help the community of faith relate to people affected by gender dysphoria in a biblical and Christ-like way:

1.   God created humanity as two persons who are respectively identified as male and female in terms of gender. The Bible inextricably ties gender to biological sex (Gen 1:27; 2:22–24) and does not make a distinction between the two. The Word of God affirms complementarity as well as clear distinctions between male and female in creation. The Genesis creation account is foundational to all questions of human sexuality.

4.   The fact that some individuals claim a gender identity incompatible with their biological sex reveals a serious dichotomy. This brokenness or distress, whether felt or not, is an expression of the damaging effects of sin on humans and may have a variety of causes. Although gender dysphoria is not intrinsically sinful, it may result in sinful choices. It is another indicator that, on a personal level, humans are involved in the great controversy.

5.   As long as transgender people are committed to ordering their lives according to the biblical teachings on sexuality and marriage they can be members of the Seventh-day Adventist Church. The Bible clearly and consistently identifies any sexual activity outside of heterosexual marriage as sin (Matt 5:28, 31–32; 1 Tim 1:8–11; Heb 13:4). Alternative sexual lifestyles are sinful distortions of God’s good gift of sexuality (Rom 1:21–28; 1 Cor 6:9–10).

6.   Because the Bible regards humans as wholistic entities and does not differentiate between biological sex and gender identity, the Church strongly cautions transgender people against sex reassignment surgery and against marriage, if they have undergone such a procedure. From the biblical wholistic viewpoint of human nature, a full transition from one gender to another and the attainment of an integrated sexual identity cannot be expected in the case of sex reassignment surgery.

7.   The Bible commands followers of Christ to love everyone. Created in the image of God, they must be treated with dignity and respect. This includes transgender people. Acts of ridicule, abuse, or bullying towards transgender people are incompatible with the biblical commandment, “You shall love your neighbor as yourself” (Mark 12:31).

8.   The Church as the community of Jesus Christ is meant to be a refuge and place of hope, care, and understanding to all who are perplexed, suffering, struggling, and lonely, for “a bruised reed He will not break, and smoking flax He will not quench” (Matt 12:20). All people are invited to attend the Seventh-day Adventist Church and enjoy the fellowship of its  believers.  Those who are members can fully participate in church life as long as they embrace the message, mission, and values of the Church.

9.   The Bible proclaims the good news that sexual sins committed by heterosexuals, homosexuals, transgender people, or others can be forgiven, and lives can be transformed through faith in Jesus Christ (1 Cor 6:9–11).

10. Those who experience incongruity between their biological sex and gender identity are encouraged to follow biblical principles in dealing with their distress. They are invited to reflect on God’s original plan of purity and sexual fidelity. Belonging to God, all are called to honor Him with their bodies and their lifestyle choices (1 Cor 6:19). With all believers, transgender people are encouraged to wait on God and are offered the fullness of divine compassion, peace, and grace in anticipation of Christ’s soon return when all true followers of Christ will be completely restored to God’s ideal.

[2] Those born with ambiguous genitalia may or may not benefit from corrective surgical treatment.

[4] This sentence is part of a succinct summary of gender dysphoria provided to introduce DSM-5TM that was published in 2013: https://www.psychiatry.org/File%20Library/Psychiatrists/Practice/DSM/APA_DSM-5-Gender-Dysphoria.pdf (accessed April 11, 2017)

[5] Cross-dressing, also referred to as transvestite behavior, is prohibited in Deuteronomy 22:5.