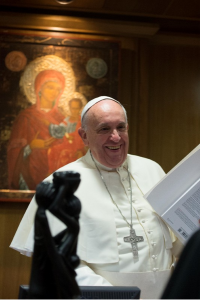 Pope Francis’ encyclical on Climate Change was published on May 24 2015.  This document, well researched and comprehensive, examines all of the aspects of climate change: historical, geographical, political, economic, financial, social, cultural, psychological, behavioral, and of course spiritual.  The encyclical also evaluates the efficacy of the responses offered by governments, institutions and organizations to the threat of climate change and suggests some possible approaches.  Sprinkled throughout this intelligent and pragmatic discourse we nevertheless find some of the familiar views held by the Vatican:

Once again in the history of Protestantism, smooth and clever Jesuit ideology is unfolding a formidable smoke screen to position the Vatican as the One World Conciliator that can bring all factions together to solve the challenges of climate change.  Protestant friends, if you’re not firmly anchored on the Word of God, you too will be swept away by this endtime overmastering delusion.